“I need a travel bae.” -Lauren

“You notice the stoves in the kitchen, and I get this text about what to get from the store. It’s perfect.” -Dion (shows text with picture of the Kellogg’s Eggo box she has to pick up)

One of us is married. One of us is single. Both of us came from divorced families. One of us gets an inside look at what causes marriages to go off course. One of us asked lots of questions as this was an education in what happens when the wedding photo album fast forwards 25 years.

The realness of this film is a prep guide into what communication (verbal and nonverbal) can do to a relationship. Do we really look at our partner? Do we understand what our partner needs from us? Do we make our partner fit into a box that doesn’t fit for them? Is your love for each other stronger than finding that fulfillment in another place or person? 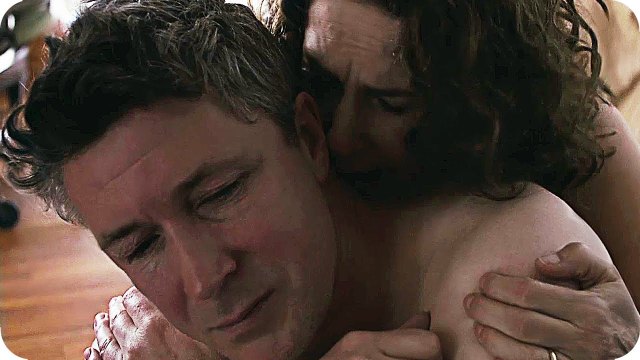 Mary, played by Debra Winger, and Michael, played by Tracy Letts, without much or coded dialogue they give an inside view into what happens when life becomes routine or mundane. They want to escape. Hell, anyone wants to escape when we feel our lives become routine or mundane. As the viewer, we see them. We understand what they need to break up the routine and mundane wheel of life. Finding it in others, and when they really see each other they rediscover the love they had from the wedding album. Quite frankly, we each find ourselves in the story. Real life.

What happens when they start to see each other? “The Lovers” beautifully answers that question with Labi Saffire’s song “It Must Be Love” played on the piano by Michael. Mary and Michael are left to clean up the mess they mutually created. They stopped really seeing one another. The said and the unsaid takes the audience on a slow, reflective ride about relationships of the heart.

From the browning bananas on the counter to the conversations about the grocery store, this film hits the real factor. A messy, real factor. Although, the temper tantrum thrown by the grown son was a bit much.

Both of us love love stories. This charming story of love between a middle aged, married couple, left us enjoying this film. Thank goodness we were the only ones in the theatre. There was to much discuss, and Dion had to fill in the underlying details as a married woman and psychiatrist. She was the expert in this area. I’m in search of a travel bae. We both have prioritized the importance of being a woman that is seen by her partner. Mary wanted to be seen. In her tears, laughter, and silence, she just wanted to be seen.

From the Desk of Dr. Metzger:
I have a confession. I live for romantic comedies where the leads are at least 50 years old. If Jack, Meryl or Diane Keaton are starring, I’m seeing it. If they’re in it together (shout out to “Something’s Gotta Give”), I’m seeing it at least twice.

This film showed marriage from a unique lens where both spouses are unfaithful. We’re so used to seeing the cheater and the victim storylines that I quite enjoyed seeing the double cheater angle. The question is if they’re both wrong, who is the victim? (Spoiler alert, the son tried to play the victim but I wasn’t buying that adult tantrum). It accurately depicts the awkward silences and utter boredom in a strained marriage. It was a decent film but moved slow at times and did I already mention that the son is annoying? Anyways, save the movie ticket and catch it on your couch.