Dion: This might be the best film we have seen yet.

Sean Baker brought the housing crisis and the significant impact that it has had on women, particularly single mothers in a film that will be listed as a cinematic classic.  “The Florida Project” is not a preachy film about the crisis, but beautifully humanizes these women and their fight to find small and large moments of joy. We see in this film, how community and family can be built regardless of where you live.

Through the eyes of Moonee (played by Brooklynn Prince), we see a little girl who was part of this community of families living on the margins.  Moonee has developed the mature language and street savviness of a teenager, but juxtaposes with the innocent little girl that washes her doll’s hair in the bathtub.  Moonee and her mother, Halley (played by Bria Vinaite) show the audience that a love between a mother and her child knows no limits, and that ALL mothers want the same things for their children regardless of socioeconomic status. Every mother and person in their child’s village loves them the best way they know how, and will go to the ends of the earth to protect their innocence by creating a much joy as they possibly can. The scene with the Zebra Cake and the birthday candle under Disney’s fireworks.

William Dafoe gave an unforgettable performance as Bobby the “protective father” amongst the extended hotel residents that became family, which sat in the shadows of The Magic Kingdom.  He gave these women and their children a slice of home in this world filled with struggle. May we all have an ounce of Bobby’s compassion and humanity.

To quote Father Greg Boyle, “we go to the margins not to save the world, but to savor it.”  It is without a doubt a heavy contender for several major awards in all categories because we savored every moment with the residents in this Purple Paradise.  Thank you Mr. Baker from bringing the story of so many families to life. 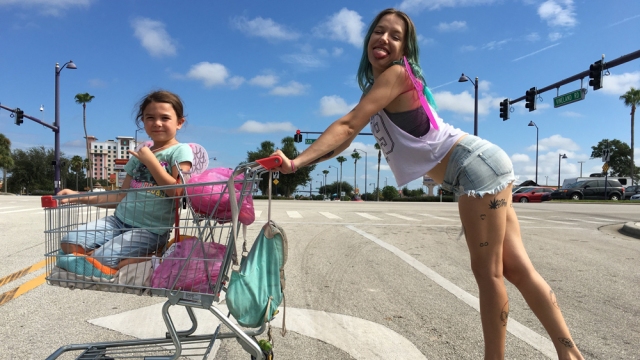 Every year, there comes a movie that reminds me of why my love of cinema runs so deep.  “The Florida Project” was that film.

A marker of cinematic excellence is being fully engrossed in a film to the point that I feel like I’ve been transported. I was in that extended stay in Kissimmee, Florida, and found myself fully empathizing with the protective spirit of the loving but so flawed mother. The character development, subtle yet poignant details, and cinematography were all magnificent. The audience got to see the world from the lens of a precocious 6 year old girl named Moonee (played by Brooklynn Prince). You can go ahead and put her name on the Oscar ballot from now. The acting talent of these young kids always blows my mind (last experienced watching a young Dakota Fanning). This young actress vividly demonstrated what uninhibited passion for adventure combined with the childhood naïveté looks like. A place where a swamp becomes a safari and a bathtub becomes a fairytale backdrop. Community is based on perception. “The Florida Project” won. It’s undoubtedly the best film I’ve seen all year.