“There are things that are done in this film that you’re not quote – unquote supposed to do.” – Boots Riley

Do we work to live or live to work?  What is our non-negotiable when it comes to our career? Have we become so distracted that miss what is happening in and around us?  Boots Riley created a cinematic masterpiece that was akin to the Choose Your Own Path books.  With Cassius (played by LaKeith Stanfield) and Detroit (played by Tessa Thompson) as our tour guides for a social commentary roller coaster ride where code switching and other cultural symbolism help us enjoy the ride into the absurdity of our current corporate and societal culture.

On the surface, Cassius is a young man that has found his way from living in his uncle’s garage to accessing the exclusive elevator as he climbed Regalview’s Corporate Ladder.  Cassius begins to understand the true cost of the REGAL view.  Sitting in the audience, I found myself reflecting on my own past corporate experiences where I compromised at times wondered if understood own non-negotiable and lost my identity like Mr. _________ (played by Omari Hardwick).   Detroit’s earrings on the surface appear like as just fashion found in vendor shops that are cultural hubs for African-American women; however, through her earrings we find subtle messages that give voice to her rage like the graffiti she tags on Worry-Free billboards.

This is what brilliant film making is about…taking the audience so far out to the land of absurdity to make the viewer respond to the foundational message in the film.  There are few filmmakers that can do it so effortlessly, Spike Lee is one and now Boots Riley.

PS: I may have gotten over my anger towards Omari Hardwick, and will no longer refer to him as the “man that gave Janet Jackson AIDS” from his role in “For Colored Girls…”

“Sorry To Bother You” is one of those films where you walk out like “what the hell did I just watch?” but then realize it had some pretty dope messages. It touches on race, politics and capitalism without ever losing its comedic touch.  There was even a reference to the “insiders” who try to influence us to believe wrongdoing is good. That screamed “Kanye” to me.

It’s a good film that is oozing of creative juices. There were parts that reminded me of Netflix series “Black Mirror”, where human behavior is placed under a magnifying glass. “Sorry to bother you” did seem to lag at times but maybe, that was on purpose. Who knows? It’s worth seeing even if it’s to gather your own interpretation.

One thing that is not up for debate is that Lakeith Stanfield is talented. I will be on the lookout for his next projects. 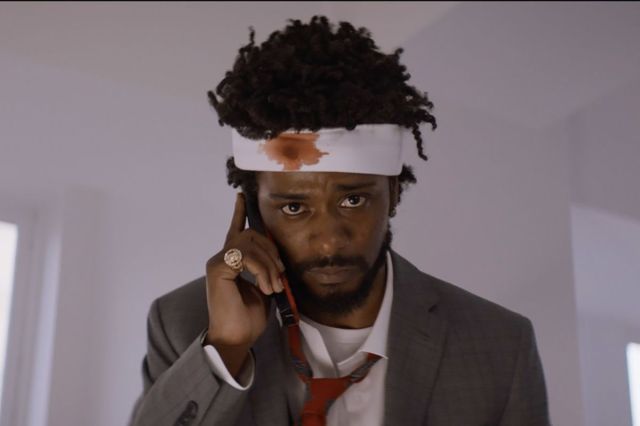 Sorry to Bother You

2 thoughts on “Sorry to Bother You”